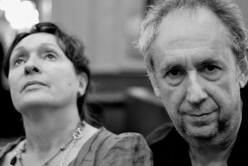 Violence, borders, immigrants, uncontrolled capitalism, echoes of Nazism... After backing one the starkest trilogies on Europe (Paria, 2000; La Blessure, 2004; La Question Humaine, 2007), the French duo has continued to explore the margins of society
and cinema.

At this workshop, they will reflect on that other possible cinema outside the formal production system. And propose that the processes of documentation, casting, preparatory talks, locations, preliminary readings and audiovisual and musical references are part of the final film. Workshop for working on images already recorded by them, to record new images, discuss what making a film today involves and what films are necessary and why.

"We talk about production as the place in which presence (documentary) and word (fiction) are one. Production in the "Brechtian" sense: the author must invent their own conditions to produce their work. Production in a much broader sense than what we understand by "producing a film": we all know the official rules of film making, budgets, aid... But here, we want to talk about something else, we want to treat production as a possibility, as the space in which to create the conditions for a shoot, either a short, medium or feature­length film. We will work by viewing fragments of both big budget and independent films: Wang Bing, Chantal Akerman, Hitchcock, Godard, Tarkovsky, Eustache, Lav Diaz... We will work by recording material, working on a voice, working on sound".