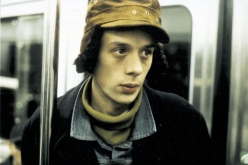 The first part of Nicolas Klontz and Elisabeth Perceval's trilogy on modern times: a dark, night-time film on the excluded, drug addicts, vagrants, the marginal and the homeless, who, wherever they are, wander from one place to another through the streets of Europe.

"Fictional cinema has been and will always be documentary," says Klotz. The result is an underworld of actors and non-actors, police sirens and unidentified shadows, which received the Special Jury Prize at the San Sebastian Festival in 2000.