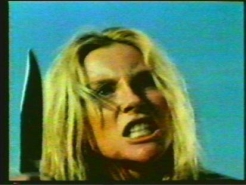 With more than fifty years of career as a director, the five works of The Wall represent the different creative periods in Birgit Hein's work, essencial filmmaker of the experimental cinema: varations in the movement and duration of the film, works dedicated to Kali, destroyer god of Hinduism, optical illusion, found footage from the internet, etc.

"When we switched from painting to filmmaking in the mid –sixties we wanted to discover film as a potential visual arts medium according to the ideas of modernism, that one most derive the rules of an art form from the characteristics of its material. We wanted to define the fundamental elements of film along these lines in order to find our way from the depiction of reality to the reality of depiction.

In the beginning it was our concern to analyze and examine the process of reproduction including the film material itself as well as optical, chemical and perceptual processes. Only through the fundamental detachment from the context of traditional narrative cinema can film become available as a visual art medium.

The program at The Wall combines very different examples of our approach to the medium in more than 40 years, including found-footage and documentary works.”