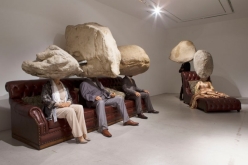 In abolishing the borders dividing art, science, activism and inventions, Agency of Living Organisms proposes to undertake actions while building a structure of engagement with artists confronting urgent societal and ecological phenomena.

The aim of the project Agency of Living Organisms is to artistically and collectively address the interrelations between contemporary urban societal structures and nature, through the organizing of ephemeral ‘living’ sculptures, micro-political actions and interventions.

The impetus comes from a micro-scale observation: compared to humans, plants and other living organisms have a different, sometimes surprisingly sophisticated sensorium with which they interact and exist within their surroundings. Similarly this sensibility towards its immediate environment is a characteristic of the artists among us. In such, this project offers a research for the interaction between both of those protagonists.

Agency of Living Organisms conceives itself as an entity, a social sculpture. The use of the word “sculpture” harks back to Joseph Beuys’s notion of “social sculpture” as “how we shape our thoughts into words [...and] how we mold and shape the world we live in”.

The fascination around the medium of sculpture derives from its notion as a work that exists in relation to its surroundings. We have rethought sculpture since Harald Szeeman’s 1969 exhibition Live in Your Head: When Attitudes Become Form. Today considered a landmark exhibition, this event introduced a new way of rethinking art according to the creative process.

Rethinking the medium of sculpture continues today. Some of the most radical alterations are the “living sculptures“ as for example the artist Tino Sehgal employs, enlists, and co-opts the usage of individuals as his malleable clay or the “sculptural theater“ by Ryan Trecartin. Both are interesting examples of how existing notions of theatre and performance can be approached anew and have a strong sculptural approach.

In response to the theme in question, the project proposes a social living sculpture, an expanding format that opens the walls of the gallery into the urban and natural environment. Agency of Living Organisms will engage invited artists to work site-specific.

The aim is to transform the “nervous system” of the urban place via its cultural center, whereby audience and participants become aware of the city as an extended living organism in themselves. This project acts as a catalyst to encourage dialogue while proposing new perceptions of alternative forms of action.

The invited artists will seek to highlight an appreciation of transience, where their works of art shift from objects of (self)-representation to communicative and discursive acts, exploring the urgency of the everyday.