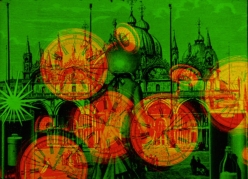 The sixties shared a common reduced narration and an awareness that turned towards actions giving rise to explorations into elements from the film medium. 9 Variations on a Dance Theme underscores the camera movements that set a specific artistic language in motion, in this case dance. Film That Rises to the Surface of Clarified Butter reiterates the animator’s gesture to return to the metaphor surrounding the misleading relationship between the two-dimensional reality of film and the real world. The multiple superimpositions in Castro Street (The Coming of Consciousness) and the continual tracking shot reveal a walker in a paralysed industrial landscape. The fragment from Walden: Diaries, Notes and Sketches focuses on simple and immediate experiences from the snapshots of Jonas Mekas’s lived moments. The recovery of an aesthetic of surrealist appropriation turns Our Lady of the Sphere into a deliberately illegible tale between sci-fi, the world of children’s fantasy and dreams. The session concludes with an unexpected and surprising film alluding to how experimental film has previously been exhibited.