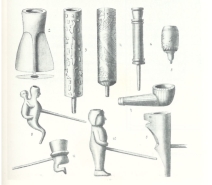 On this occasion Karl Kraus, the Austrian writer and journalist will be resurrected by the artist Asier Mendizabal. Karl Kraus opened his mythical magazine Die Frackel (The Torch) with an article entitled “Demolished Literature”. In this short essay he described the closing of one of Europe's leading literary coffee houses, the Café Griensteidl in Vienna.

Kraus's lectures often became the basis for the texts he later published in his magazine. In his dissertation entitled “The Destruction of the World through Black Magic”, which contains several themes frequently repeated in his thinking, the modern city is presented as a giant narcotic that perverts languages and quickens the nerves of its inhabitants.

Smoke Politics  is a programme of monthly presentations by artists, anthropologists, writers and art historians. Smoke Politics is also an exercise in  invocation and possession, with the voices of philosophers, poets, politicians and chemists occupying the bodies of these guest speakers throughout the year.