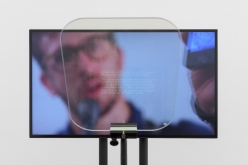 The project When the body disappears (initiated by Mugatxoan in 2011-2013) questioned through a series of workshops, radio programs, performances and publications, the imperative of being present, but also, the present of being in continuous translation, as a renewed perspective on / of performance practices. For its second phase, the project spread to other European cities, including Aubervilliers, where Virginie Bobin - then Projects Coordinator of Les Laboratoires d'Aubervilliers – became involved and subsequently wrote a text for Cuaderno 2. Being / Translation (ed. Mugatxoan, 2014).

From this experience and the ensuing conversation, grew the desire to launch a joint inquiry into translation as a rehearsal space for identity politics and the politics of the body, as a terrain of ​​research from which Itzulzen ari garaarises. This conference will be an occasion to share works that have nurtured our year of research. We will more specifically focus on the work of Lebanese artist Lawrence Abu Hamdan, which deals with the relationship between listening and politics, borders, human rights, the testimony and the truth through the production of documentaries, essays, audiovisual installations, video works, graphic design, sculpture, photography, workshops and performances.