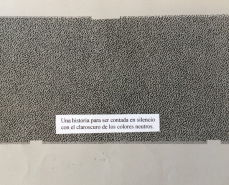 Isidoro Valcárcel Medina (Murcia, 1937) is one of the pioneers of the conceptual art in Spain. His biography includes Architecture and Fine Art studies in Madrid and the National Arts Award in 2007. But beyond degrees and exhibitions in the most important art centers in the world, we could define Isidoro Valcárcel Media as a rebel, calm, coherent, radical, quotidian, social, hazardous, humorous, political, avant­garde artist and pure XIX Century. We talk about XIX Century because of his classic way of dressing Spanish cape and because of the communication that he establishes with his interlocutors: with Isidoro you talk in person, by phone or by postal correspondence, no mails, no cell phones, nor social networks.

Some months ago, the International Documentary Film Festival Punto de Vista of Pamplona got back his film La Celosía, presented for the first time in the mythical Encuentros de Pamplona in 1972, that international avant­garde isle where the most “moderns” of the time were mixed without any prejudice: John Cage, the txalaparta of the Arze brothers, Steve Reich, Laura Dean, Isidoro Valcárcel or Dennis Openheim.

At the same time, it was in the Punto de Vista film festival where Isidoro presented a work/conference entitled 9 secuencias sobre la pantalla, that reflected precisely about the physical fabric support where it happens what we call Cinema.It wasn't a conference about the frame, or the light, or the shadows, or about art, images and sounds History, no, it wasn't anything like that, it was a dissertation about “that object that nobody talks about. The screen. The screen on its own, yes”, like Isidoro said during the conference. This is talking about cinema and art from the pure contour, from the periphery, from the edges, from the humour, from the magic, from the provocation, from the screen, yes, from the screen... Definitively, from the artistic construction. Pure Isidoro Valcárcel Media.

That is why in the moment that we started thinking about how to present the Tabakalera cinema with "something that was not a film", we thought immediately about Isidoro Valcárcel Medina. Then, it began a classic communication that brought us to this conference/intervention/performance entitled Another History of Cinema. Every fifteen days, there was a phone call to define the content of the action. There were also some letters. As well as messages in the voice mail: if Isidoro doesn't answer, it sounds a train station, very classic as well, with real train sounds, tracks and platforms; Right after you hear Isidoro's voice saying really quickly: “You can leave the message you want”.

At the beginning, Isidoro asked about the opening of Tabakalera and we told him, among other things, about the opening exhibition, Moving image contours: Points for a surrounding movement. Then, he remembered a piece that he presented in Valencia some years ago, where over the sound of a film by Robert Bresson, he told about the images of the film. But he also told us that he doesn't like to repeat works, that's why he defined little by little this piece that will be a total première and that deals with the cinema History from his particular artistic view.

We end with an invitation for everybody to assist to the “film”. And we share one of his postal deliveries with a biographical format: on a paper with a title written with a pencil that says “Currículum vítae de Valcárcel”, the artist writes: