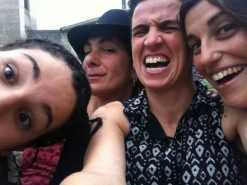 Just before the former tobacco factory re-opens it's doors transformed into a contemporary culture centre, there will be a music gig by Pottors ta Klito at Nestor Basterretxea entrance. It's a music group based on feminist letters that make punk music, but also mix any type of music that they like. “We do pottor music”.

Pottors ta Klito was born in 2009 in the garage of Korta, around a microphone stand constructed from a drum and plastic tubes. Ainara (drums), Altxu (guitar and vocals), Jorge (guitar) and Korta (bass) were friends, but they also share their love for music and feminism ...

We offered our first concert in 2010, at Putzuzulo and then, the second in Leitza, in the feminist meetings.

In late 2012 we had changes, Jorge left the group and Guru came in. We moved out from the garage and started rehearsing in a room with egg boxes on the walls.

In 2013 we gave many concerts and, after the summer, we signed our singer Amaia which gave more strength to the group.

In 2015 Atxu left the group and we started playing as a quartet. And that's all by now. POTTORS!