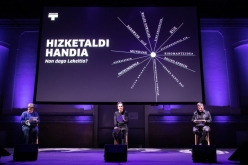 “The Great Conversation: Non dago Lekeitio?" sessions are the prelude to the Komunikazio-Inkomunikazio exhibition project that will be held at Tabakalera in the spring of 2021, with a programme of conferences, seminars, exhibitions and music cycles. This project takes as its starting point the experimental works called Lekeitioak by Mikel Laboa, and, based on them, will study the relationships established between heterogeneous cultural elements such as music and popular culture, the phonemic experiments derived from the literary avant-garde and artistic practices, the use of glossolalia and idiomatic mixing and a particular use of the idea of translation and montage.

For the development of this programme, a working group has been formed, made up of Itxaro Borda, Maialen Lujanbio and Xabier Erkizia. This year's "The Great Conversation: Non dago Lekeitio?" is the result of their work, in which all these issues can be approached through voices from different areas of knowledge and experience.

The Great Conversation is a proposal open to all those who wish to take part in it and is understood as a space for debate.

The year nineteen-... a time in history. A village on Earth. The tides of political disputes and artistic movements breathing through Europe and the rest of the world, in a socio-politically drowned Hego Euskal Herria. A language, Euskera, scorned and banned, like so many other languages. In languages, sounds.

Mikel Laboa’s words seem like a game, like aesthetic experimentation with the sounds and melodies that his unparalleled voice presents. Together with others, he brought forward and reread our popular culture’s rich legacy, placing it face to face with contemporary forms of expression.Old melodies, new manners. Lekeitioak.

The year two-thousand twenty-... a time in history. A time after death. Europe is not what it was before, nor is the Basque Country. The socio-political situation has changed entirely. So too has culture´s place. Languages live, or rather, survive. And in languages, sounds, and in sounds...

Yet now, a sound’s echo is different, because the landscape is too; as is meaning, and what cannot or means not be said. Messages with meaning or a lack of sense. The sense of having senses. Hearing and the senses are different things.

What do the words say now? What sounds are tradition now? What is avant-guard now?

Where do they come from? Where are today’s artistic paths of sounds and melodies going?

Where are our Lekeitoak of today?