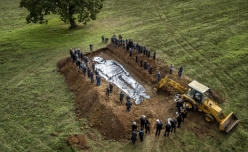 During the lockdown for the Covid-19 pandemic, Luca Guadagnino, with a small film crew, arrives to Sicily from Milan with just a smartphone and a tablet, to knock on the doors of his childhood friends and see how they lived through this exceptional time that brought the entire world together.

Jafar Panahi’s new short film follows the filmmaker, his daughter, and her theatre-producer friend to a remote Kurdish village to visit a woman, a preternaturally gifted singer, whose traditional family refuses to allow her to perform publicly. What they find there is both beautifully surprising and richly allegorical: a secret to be kept hidden that is nevertheless yearning to break free.

A peasant community gathers on the hills bordering three regions to celebrate the funeral of traditional agriculture. A cinematic action to prevent the disappearance of a millenary culture.

Inspired by a powerful involuntary mania, which took hold of citizens in the city of Strasbourg just over 500 years ago, Strasbourg 1518 is a collaboration in isolation with some of the greatest dancers working today.

He works at the fairground as Stump the Guesser, who can guess anything for a fee. But his tricks stop working. And he unwittingly falls in love with his sister. He sets out to scientifically disprove the theory of heredity and marry his beloved as soon as possible. An absurdist firework of a silent film in black and white.

Based on archive footage from the 1950s and 1960s, the film revisits gala soirees at the Opera de Paris, frequented by the French and international celebrities, royalties and heads of states. With exquisite editing style and soft humor, Sergei Loznitsa revives the glamorous era when kings and queens, presidents and film stars ascended the stairs of the Garnier temple to worship the Art of Opera…