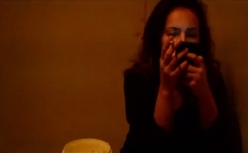 Natasha Nedelkova is our guest artist on the web, during May 2015. You could watch her work  I want to abuse- I don't like, as she is taking part in Programme09: Portrait / Self-portrait Antiportrait.

In this work I refer to the sound of my voice as much as the image and the text (CC), as a most common and already experienced form on television and cinema. The story is not hidden, there is none, but it does suggests some of the aspects of life that interests me, like the potential of images, sounds, news and moreover, information of all types. Inspired by the delicate position of power in everyday talks, popular videos, images and sounds, I wanted to create one free, self-referring, and anti-narrative, that a priori, does not have meaning but each viewer participates in the creation of one, based on his/hers experiences and choices.
This video is a part of my research about the actual communication channels and their function in the contemporary society. The large numbers of social platforms on the internet, widely spread TV spectacles, the everyday life itself, where a countless ways for getting information elude different ideologies, inspire me as a subject to treat in my work, encouraged by the work of Antoni Muntadas, Keren Cytter, Ryan Trecartin and Lizzie Fitch.
The idea was to create one personal platform in order to explore the vibrations from my voice while giving truth and false information, enhanced by the combination with image and text.
Natasha Nedelkova

A few months ago, the association Videographies Liege, a pioneer in the issue of video art in the Belgian public television and focused on the promotion of the visual arts, invited us to participate as jury in the Eurovideo festival, a European meeting focused on new audiovisual languages based in Belgium. We had the opportunity to watch the work of 24 emerging artists who participated in the meeting. Natasha Nedelkova work is one of those artist and we thought instantly that we may invite her to join the program on Portrait / Self-portrait / Antiportrait.

Indeed, Natasha Nedelkova’s work has a lot of portrait, this invented word that helps us reflect on how we build our portrait through denying, disappearing, from the picture, from the screen, from the text. Built through the void, Oteiza theorized about it.

There is a text written by the French writer Éduard Levé precisely entitled  Self -portrait, lists proposed as a way of telling. And I copy from page 17:

The collection could go to infinity, and does so throughout this book-portrait, with a succession of lists and collections of things seen, experienced, felt, hated, loved, lost, found, and so on. Collection as a portrait of the collector, could tell it this way, yes. And now it’s time to summon two other major collectors, Joe Brainard with his book I remember and the subsequent review by Georges Perec, Je me souviens.

Natasha Nedelkova continues the tradition of the lists as a way of self-portrait: from”I agree” she switches to “I like it”, which is more contemporary, more 2.0, more for social networks. Saying no as a form of construction. Saying no as a way to assert ourselves. Contradictory, yes. Ironic, yes. Contemporary.