Songs from the north 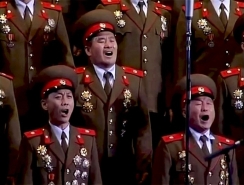 Double korean session , a short film and a feature, two documentaries, two Korean directors who wonder about the history of their country, the North-South conflict and their own memory and identity.

How to film the forbidden? How to show what can not be shown? Freely inspired by the North Korean propaganda village, Kijong-dong, Hayoun Kwon reveals a place, set and plunges us into the fiction, achieving his journey by proxy. The movie testifies of this ghost village in its real state: a mechanism of fiction. The reality of a border in front of its creation. An unattainable village other than by the imagination.

Songs from the north is an essay film which looks differently at the enigma of North Korea, a country typically seen only through the distorted lens of jingoistic propaganda and derisive satire. Interweaving footage from my three visits to North Korea, together with songs, spectacle, popular cinema and archival footage, Songs from the north tries to understand, on their own terms, the phychology and popular imaginary of the North Korean people and the political ideology of absolute love which continues to drive the nation towards its uncertain future. To look closely and objectively at North Korea, a country that challenges our most fundamental assumptions about the human condition, is ultimately to question the meaning of freedom, love and patriotism.