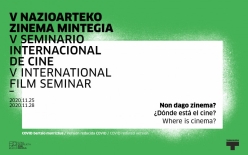 Let's begin with the COVID note:

These months, while we were organizing the new edition of the film seminar, we closed screening, international guests, round-tables, workshops and guided tours to the exhibition. The current situation makes impossible to develop the program as we were thinking about it and how we imagined it. Because of this, we propose a reduced version that mantains somehow the spirit / ghost / spectre that we wanted to share with the public.

Fith edition of the International Film Seminar in dialogue with the annual exhibition of Tabakalera focused on cinema and visual arts: Zin Ex. From abstraction to Algorithm. Two filmas as starting point: Deux Fois (1968) by Jackie Raynal and Film (1965) by Samuel Beckett and Alan Schneider. An itinerary-hypothesis: from the spectres to the new cinephilia. And one question: friend, ¿Where is cinema where?

The international guests that we wanted to be part of the seminar will be part of our film program the following months, as trips and frontiers go back to normality. There is no rush, and our commitment with our guests is that their proposals and works could be part of our program the next year, because our interest in their work and approach to the cinema goes beyond the seminar's framework.