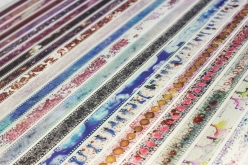 Looking back over a history of one hundred years, experimental cinema has rigorously challenged cinematic conventions. To reach beyond telling stories, artists and filmmakers examined the material conditions of their medium, such as light, motion, celluloid and, with the advent of television and video, electronic signals. This relationship with the technical device—whether a camera or a computer—revolutionized the creative process and opened ever new possibilities for critically reflecting the world we live in.

With Zin Ex. From Abstraction to Algorithm, Tabakalera is starting a series of exhibitions timed to coincide with the San Sebastián International Film Festival. The first edition of the series presents an international selection of early avant- garde films, computer and video artworks from the 1960s and 1970s, contemporary films and installations, and other artistic media. Archival objects not only shed light on historical production tools and dissemination, but also on the mutual exchange between art, science and industry, such as took place for example at the Computing Centre at the Univerisity of Madrid (CCUM).

Optical phenomena, geometric patterns, moving images generated by sound, concrete poetry, machine rhythms, depictions of what remains unrepresented: Zin Ex. From Abstraction to Algorithm offers a wide spectrum of audiovisual experiences that defy accepted ways of seeing and our notions of what exists. Emphasizing the social situatedness of artistic practice, the exhibition also explores the shifting objectification of the human body and the political, economic and cultural implications of a global society increasingly shaped by digital technology.