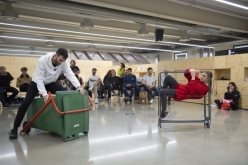 Make It, Don’t Fake It invites the spectator to relax and inhabit a space where, very gradually, different layers of meaning are added. Images, voice, memory, body, movement, tiredness and sweat intertwine with the spectators’ gazes and bodies to share, for a unique space of time, a common universe.

What does it mean to appropriate the language of film with regard to the script, the soundtrack and the silences? Make It, Don’t Fake It is part of the Asleep Images project, which asks: “Can an individual person store/be/represent/reproduce cinematic content?”

The transit between two such different media -visual and performance- enables Make It, Don’t Fake It not only to have an impact on peoples’ use of memory as storage devices, but also on the invention process brought about by its reappropriation.

In collaboration with CentroCentro Madrid.