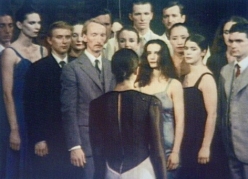 The artist Marion Cruza has curated a series of ten films by Chantal Akerman that will be screened throughout January, February and March. In this third sessión of the series participants will watch Lá Bas (2006).

“Is always better to play with cinema effect than trying to recreate certain effects of the theater: a montage of equivalences presents the universe of Tanztheater Wuppertal collective, between rehearsals, backstage and shows. Dance, drama and palliative cigars. Five weeks following Pina Bausch and her dancers. Detecting possibilities is not as making them happen. Wuppertal , Milan, Avignon , Venice . Pina works anatomy and experiences, draws enigmas, extravagance, stereotypes and everyday gestures. Chantal shares her love for the gestures, though Chantal feels the need to protect from her theater. Her modesty is a way to be there, watching intelligently.

A company member says : “I became a dancer because I had an accident and did not want to be a soldier .” This film was made for television series Repères sur la modern dance .Marion Cruza.