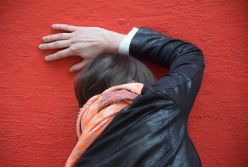 A project by Jone San Martin

It is said that in the late 1960s when Bruce Nauman finished studying Art, he was faced with the question: What now? What is being an artist when you are alone in the studio? Years later, Nauman stated in an interview that “if I am an artist, and I am in the studio, everything I do in the studio is art. At this point, art becomes more of an activity and less of a product”. His profane and simple answer raises two important questions: on the one hand, he starts from the premise that everything an artist does is art and on the other hand he questions the value of art as a product and turns it into an act. This gesture reveals the division between object art and process art. The difference between the footprint and your gesture.

During this period, Nauman placed a neon sign in his studio, facing the street. The spirally written poster read: "The True Artist Helps the World by Revealing Mystic Truths." This phrase, which could be read from the street, did not seek to sentence, but to give meaning to artistic practice and to provide the artist with tools, in his studio, alone, for long periods of time. The statement of the title of this poetic spiral is neither funny nor completely serious and the contradictions expressed produce an ambiguity that is both playful and profound: "seriousness without sense or serious lack of meaning". Question and answer come at the same time. The hardest thing for Nauman was the phrase itself, like when you say something out loud to see if you believe it. Once written, he could see that the statement was, on the one hand, a totally dumb idea and, on the other hand, something he believed in. It is true and it is not true at the same time. The answer depends on the interpretation.

Nauman's work is clearly influenced by Ludwig Wittgenstein and Samuel Beckett animating the duplicity of language and the intrinsically comic nature of repetition. A consequence of this is that during those years in which Nauman spent a lot of time alone in the studio, he made a series of videos of himself investigating the relationship of the body with space. Study as a white cube and the body as a material from which to sculpt the passage of time. In several videos we can see Nauman repeatedly falling in a corner of the studio and from different angles. A simple gesture and repeated for hours. In "Dance or Walk on the Perimeter of a Square", Nauman explores the possibilities offered by a square on the ground. Limitations are places of obligatory compliance and at the same time they are spaces full of possibilities. In "Slow Angle Walk (Beckett Walk)" and "Revolving Upside Down" that square is the entire studio. Always with the camera fixed and sometimes vertically, Nauman as a sculptor that he is, sculpts the possibilities of the limitations of being in space for long periods of time.

When we spend time, a lot of time, in a space, where the only thing we have is our body and time, both are directly and inevitably related. Being and time. Even if we don't really know what we are doing, the questions and the answers come out alone and in the same instant. Nauman asks himself: "How am I going to know what I think if it is not until I listen to myself?" It is in the dark, where we always find the most beautiful thoughts. It is the act of saying out loud that forces us to listen. This gesture gives us a slight distance from the weight of reality. Nothing to do. Nowhere to go.

“Here, I a.m.” by Jone San Martin has a lot of this gesture. Those videos speak for themselves, force us to discover the pleasant possibilities of limitations, space and time. The body becomes not only a medium, but also a message. Each of the spaces in our home, like that intimate and protective space, are now that white elephant that accompanies all of us from our homes.