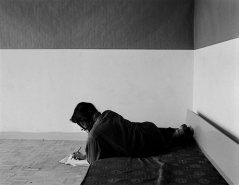 The artist Marion Cruza has curated a series of ten films by Chantal Akerman that will be screened throughout January, February and March. In this second sessión of the series participants will watch  Je, Tu, Il, Elle (1975).

“The physical experience of loneliness. Moving furniture and getting lost in the cycles of time . A journey, a road movie, a kilogram of sugar. Solipsism in writing. She. Miles and words. A truck driver telling his wish, silences, voiceover and monologue overlap. Singular pronouns, a third part that could be the first one. The reunion of two beautiful women. Conjunction: food, warmth , love . Disjunction: not rooted , escape”. Marion Cruza

Chantal Akerman created her first feature film from a text written in 1968.

… If I had shooted it in 1968, then it would have made a film about an anecdote; while the lapse of six years allowed me a staging, in where using myself as an actress was part of it. Chantal Akerman, 1991.