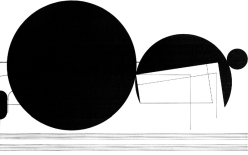 The Cybernetics of the Poor: tutorials, exercises and scores exhibition is the idea that the face of contemporary political economics may aptly be described as a total cybernetics. Cybernetics (derived from the Greek kybernêtikê ‘the art of governing’), was originally a technology of control and soon also a model of governance. Today it is a science that recasts planning and anticipation by operating with the calculability of reactions to measures and its techniques now shape both the economy and the meta-economy of the financial markets.

The title of this exhibition alludes to a bon mot from Oswald Wiener (Austria, 1935). At a certain moment, the artist characterised the culture of pop music as a dandyism of the poor, in a clear reference to Hugo Ball’s Flametti or The Dandyism of the Poor.

Like cybernetics, art also addresses media for planning and anticipation but -at least ideally speaking- with different goals to those of control. As a practice interested in human qualities, art would favour the unpredictable, the incalculable, spontaneity. Although from the moment in which all these aptitudes have become fodder for the current digital regime, art is obliged to know and study the media and the structures the dominant regime has. Thus, the exhibition states that these tactics could well be understood and defined as a “cybernetics of the poor”.

This exhibition project arises within the context of the biannual programme carried out at Tabakalera called Ariketak: la segunda respiración. Throughout this programme and under the framework described above, the initial core of four artists formed by Agency, Jon Mikel Euba, Lili Reynaud-Dewar and Camila Sposati started to develop the new productions that are now present in the exhibition. Likewise, the exhibition includes works from private collections, galleries and museums such as the Museo Nacional Centro de Arte Reina Sofía or the Musée d'art contemporain de Lyon, and those by local and international artists who offer an example of how the cybernetics of the poor can be understood.

The exhibition will have a second phase in December 2020 at the Kunsthalle Wien and will include differentiated adaptations and case studies that start with this exhibition.

This exhibition is curated by Diedrich Diederichsen and Oier Etxeberria.

Cybernetics of the Poor: tutorials, exercises and scores is the result of the collaboration between TABAKALERA and KUNSTHALLE WIEN. This project has the participation of the Austria Madrid Cultural Forum and the Flanders State of Art.