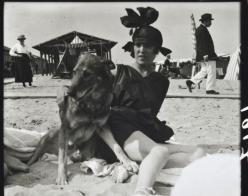 At the end of the 19th century, the so-called Côte Basque emerged as a centre for health and leisure among an international elite led by the most prominent European royal houses and their courts. Promoted by prominent figures Biarritz and San Sebastian soon became capitals of glamourous leisure and sports wear, a trend which artists, intellectuals and wealthy socialites were eager to follow. By the early 20th century, la Côte Basque had turned into a microcosm of luxury, conspicuous consumption and fashionable lifestyle.

The most prominent names in Parisian haute couture were soon to understand the endless commercial opportunities of such a scene and acted accordingly. From Worth to Patou, Paris couturiers opened branches, organised fashion shows and designed distinct collections for the Biarritz season tailored to the specific needs of their clients during their long and recurrent stays by the sea. The lively social and cultural scene of San Sebastian attracted a sophisticated and plentiful clientele, boosting business thrive and promoting cultural exchange. Moreover, the manifold leisure activities that structured daily life at the Côte Basque – from sports and strolling to concerts and balls – transformed Biarritz into a platform for fashion. On this stage, clients performed and couturiers experimented, often resulting in new trends that found their way to Paris and, therefore, altered the usual circuit of Parisian haute couture.