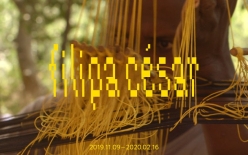 Filipa César uses photography, video and installation to take a cinematographic look at and investigate human behaviour. Her work is distinctly documental though also explores several narrative layers which give rise to fiction.

The Le Passeur (2008) installation and her interest in the colonial past of her native Portugal has led her to question the ability of history to be subjective. In turn, she proposes other ways and means of gaining knowledge and of accessing the past. In 2011 she embarked upon Luta ca caba inda (The Fight Is Not Over Yet), a collective project in which she took a genealogical look at the origins and promises of activist cinema in Guinea-Bissau and which culminated with the documentary essay Spell Reel (2017).

Algoritmos del algodón (Cotton Algorithms) is the work that Filipa César is bringing to Tabakalera. Among others, it encompasses her latest project: Creole Loom. It is an installation and an essay film in which the artist makes extensive use of Creole languages and weaving techniques, and she approaches these processes as being capable of using various highly heterogeneous elements to subvert language codes.

The exhibition will also include the pieces titled The Embassy (2011) and Cacheu (2012).