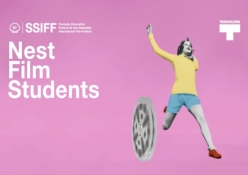 The XVIII edition of Nest Film Students, the international film students meeting to take place in the framework of the San Sebastian Festival’s 67th edition, has selected fourteen short films from among the 373 submitted by 186 schools in 46 countries. The chosen projects come from Argentina, Belgium, Chile, the Czech Republic, France, Germany, Portugal, Russia and the UK. The figures mean that, in a year, the number of participating schools has risen by 34% and the number of short films submitted by 22%.

Organised by the San Sebastian Festival and Tabakalera International Centre for Contemporary Culture, the meeting has the objective of drawing attention to the work of students from film schools all over the world. For five days, from Monday 23 to Friday 27 September, the young people will show their short films and attend masterclasses given by important film industry figures presenting their films in San Sebastian. Last year, filmmakers Alexander Payne, Peter Strickland, Jaime Rosales, Albertina Carri and Virgil Vernier shared their knowledge with the apprentices. The audience, students and professionals watch and talk about the selected short films in the Tabakalera cinema.

Once again, the short films in the Festival’s youngest section deal with the contemporary concerns of filmmakers all over the world, looking at tales of identity, love, work, future, desire, violence and existential doubts. But if we were to highlight any single trend running through many of the works in this edition of Nest we could sum it up in a single word: family. Its presence, its absence, the new models of coexistence, the future of this kind of relationships and the intimacy of those links, provide the backbone of these works: from the everyday life of a single mother to the emotional tension between two Russian siblings on a day of mourning; from the portrayal in 16mm of a Japanese grandmother to the political and vital memory of family archives; from the loneliness of numerous people as they search for their place in the world to the emotion of the moment in which a person discovers, as only a fire can make us realise, that they’re about to become an adult.

For the first time, this year’s edition sees the selection of a film submitted by the Elías Querejeta Zine Eskola (EQZE), an institution backed by the Festival, Tabakalera and the Filmoteca Vasca. The work in question is La enorme presencia de los muertos, a short film by José María Avilés (Cuenca, Ecuador, 1988), who is currently furthering his film studies with a post-graduate course in Creation at the school in San Sebastian. His short film opens when a girl finds a mobile phone deliberately left on a park bench by a painter and decorator.

This year, the Argentine director Martín Rejtman will chair a specific jury made up of students from the participating schools. Together they will decide the winner of the Nest Film Students Best Short Film Award, sponsored by Orona Fundazioa. This award, which will go to the director of the chosen project, now has double the prize money and will come this year with 10,000 euros. Rejtman (Buenos Aires, 1961) is the author of titles such as Silvia Prieto (1999), screened in Made in Spanish, and Los guantes mágicos (The Magic Gloves,2004), winner of the FIPRESCI Prize for best Argentine film and participant in Horizontes Latinos, the section in which he also presented Dos disparos (Two Shots Fired,2014) after having competed in Locarno. His latest work to date, Shakti (2019), was a competitor at Berlin Festival’s Official Section of short films. The director will return to Tabakalera following the retrospective dedicated to him on its cinema screen and having given a film workshop at the centre in 2016.

Conceived as one of the Festival’s most important sections within its strategy to foster new talents, Nest Film Students has started to produce its first fruit. In this edition, the filmmaker Oren Gerner (Petah-Tikva, Israel, 1984) will present in New Directors his first feature film, Africa, only five years after winning the Nest Film Students Award with Greenland, his graduation short. The section is organised by the San Sebastian Festival and Tabakalera, and is part of the legacy of San Sebastian, European Capital of Culture 2016.

Two estranged siblings meet again at their father's funeral. The brother seems aloof, while the sister is clearly hurt and resentful. Now that both their parents are gone, nothing binds them. So why is it so hard for them just to be strangers?

Life is easy and humble in this small seaside house whose inhabitants live according to the tides. But a dizzying event will upset this tranquility.

Chiyo is a portrayal of the filmmaker's grandmother. The film meditates on the family, intimacy and aging through a series of everyday snapshots in Yashio (Saitama prefecture), from a summer fair to Buddhist rituals.

During the time of One-child Policy in China, Yan is a boy who was born as the second child in the family because his parents want a boy. The parents send his older sister away to the country side. To cover the secret boy, Yan was disguised as a girl growing up. But Yan confuses about his gender identity and struggles with the conservative world around him now. Drifting his dad's old taxi becomes his way of expressing feelings. Tonight, he decides to take on a journey where past and dream meet.

It's summer in the Portuguese countryside, where the local festivities take place. Chico is haunted by a hate crime committed in his village against a boy who was secretly close to him. Throughout this journey, Chico, pressured by his friends, tries both to follow their social standards and to hide his fears and desires.

Amanda, an obliging and solitary woman, lives with her son Daniel in Chile’s southern mountain range. Octavio, one of Daniel’s friends, is accidentally injured while they’re hunting in the forest. Amanda takes charge of the curing sessions, developing an intimate relationship with the boy. Both discover that contact with the wound produces an addictive pleasure.

On an ordinary Sunday morning, Karin breaks out of her conventions and impulsively leaves home on her daughter's racing bicycle. She wants to look for her son, who left the sheltered family home a while ago. Karins' way leads her to a farm where her son has settled down with other societal dropouts. Unconscious of her behavior, she falls back into old schemes of mothering, reminding her adult son of why he left his old, conventional life. Their current mother-son relationship seems stagnant and they are challenged to meet each other in new way.

Ivan is sad because his partner Merile has just left him. Alex has put up with him all night long while they partied. When the sun comes up they decide to go home, but something unexpected awaits them in the car: a young girl with a face injury asks them for help.

Boris and Hugo, 16 year-old friends, buy a gun. They set up a livestream video on the Internet and announce that in one hour they will commit suicide. Boris is convinced of the decision, but Hugo still has doubts. During the final moments of their lives, desire, fear, their memories and emptiness dominate the broadcast.

A little girl is saved from a fire by her young neighbour. They take shelter in an apartment from where they can see their tower burning.

Having received his last wage and sent it off to his home country, a painter and decorator deliberately abandons his mobile phone on a park bench. Shortly afterwards a young girl finds it and keeps it, like a discarded message which implores her and finally reveals the enormous presence of the dead.

Being a mother can mean constantly living in a state of physical and emotional exhaustion. This film talks about that fatigue.

Children and young people in a world without adults; like on a strange planet. The film explores the microcosm, observing and revealing how they spend their time, how they play, how they climb trees, almost always in a group and accompanied. But sometimes they are and they feel alone.

Celeste, a young photographer, delves into the old collection of negatives that belonged to her father, a photographer who fought in the 70s and 80s against the dictatorship in Chile and who went into exile in Ecuador. Thanks to the pictures, she will find a way to access her father’s elusive memory, while asking herself about the meaning of the struggle, the density of exile and how it fits in with the present day.