Programa 06 : Grabaciones en el Campo #2 + We Only Guarantee the Dinosaurs 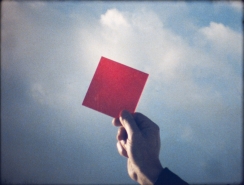 The recordings were all made during the second half of 2013 in the natural vicinity of the rural village Castro de Cepeda (León, Spain), in its geographical surroundings and/or in LEVE’s recording studio built in the village.

The pieces compiled in this publication have been realized by guest international artists whose work falls within diverse areas of artistic production, such as performance, filmmaking, sound art, and music. Rather than approaching the fieldwork as a reconstruction of the past based on anthropological or ethnographical focuses, the invited artists have recorded sound situations trigged by themselves in ways that emphasize the specificity of both the location and the moment.

Performance “We Only Guarantee the Dinosaurs”, Esperanza Collado

From a territory inherited from the confluence of cinema, sculpture, and dance, the conditions for the enunciation of the filmic image are transformed. Cinema’s luminous resonance occupies a space and has the potentiality of turning it into a tactile, magnetic, and gaseous geometry from which projecting does not simply consist of creating optical and magnified images through a film and onto a screen. To project also relates to thought processes and bodily actions.