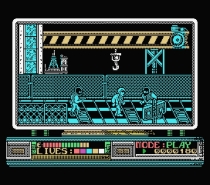 "The arrival of the first microcomputers to the Spanish market, in particular the ZX Spectrum, revolutionised home computing and laid the foundations for Spain's future video game sector". This is how the history of video games in the Basque Country starts and the story of its development, a project launched by Tabakalera and which, under the leadership of Julen Zaballa, has produced the publication we present here.

LOAD “”: Historia del videojuego vasco (1985-2009) attempts to describe, in narrative form, its evolution during the first two decades of commercial software. For this, interviews have been carried out with the main protagonists, creating a story using the main milestones of video game creation in this country in context. Interviewees include Ricardo Puerto and Raúl López de Zeus Software, Víctor Ruiz from Dinamic Software, Sabino San Vicente from Euskal Encounter, Danel Solabarrieta from Elhuyar Fundazioa and the freelancers Igor Ruiz, Iñigo Ayo and Joseba Epalza.

During the project, Julen Zaballa will present the work, which will be published in instalments, as well as its first three chapters which look back at the mid-1980s, when the foundations of this story were put in place with the development of games such as Risky Woods and Rescate en el Golfo.