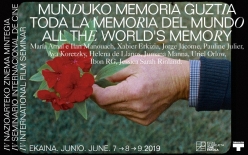 IVth International film seminar (June 7, 8 and 9) takes as its starting point Tabakalera's summer exhibition, a double proposal by the artists Jumana Manna and Uriel Orlow. Starting from the particular approach that each of them proposes to concepts such as botany, classification, nature, memory-history, politics, archive and intangible heritage, the seminar appeals to a classic of the history of cinema-essay, from which it is named after, and from which it will begin to expand: Toute la mémoire du monde,  the film by Alain Resnais (in collaboration with Chris Marker) that portrayed in 1956 that great museum-institution depository of universal knowledge: the National Library of Paris.

Is an archive that escapes the scientific classification of the museum possible?

What cracks-questions-sound-images can and should provoke certain cinema in this system based on Eurocentric rationalism?

Is an archive possible, perhaps unclassifiable, certainly non-hegemonic, that has more to do with sensitive, vital, natural and collective experience?

How to replace the museum, marketable and extinguished by a common knowledge and alien to the production-object-value-circulation system?